The men’s doubles final at Denmark Open was between the Chinese underdogs Liu Cheng and Lu Kai, who started this week in the qualification, and then world number 1, Lee Yong Dae and Yoo Yeon Seong from Korea.

It turned out to be a one-way battle. Liu and Lu have played a fantastic tournament this week beating many good pairs on the way to the final – among others the Danish heroes Mathias Boe and Carsten Mogensen – but they just couldn’t keep up with their Korean opponents today.

First game was won by Lee and Yoo surprisingly easy by 21-8, where they were leading from start to finish. And they didn’t stop in second game.

Liu and Lu however did manage to begin with a 4-0 lead but the Korean response to that was to win the next 10 points of the match. Then it seemed settled. There was one crazy rally though, that caught the spectators’ attention; Lee and Yoo smashed something like 20 times but everything came back from the Chinese, until the last shuttle ended in the net.

The Korean world number 1 won by 21-14 making Korea have a full house today; they won three out of three finals.

You can see the results from today’s finals here. 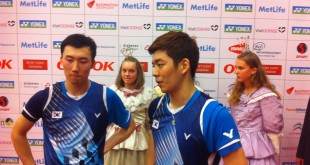